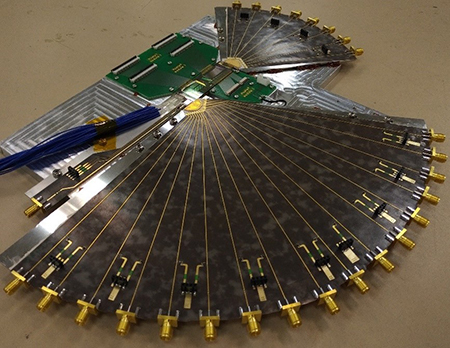 The research and innovation project HAMLET, funded by the European Commission under the Horizon 2020 programme, has reached the end of its contractual lifetime in May 2019.

The HAMLET project developed a hybrid photonic integrated platform that exploits the full potential of the microwave photonics technology and paves the way for introducing novel optical transceivers to the 5G ecosystem to seamlessly interface the optical fronthaul and radio access at the remote antenna units.

HAMLET came with the advent of 5G networks that will undoubtedly enable huge advances in important technology fields revolutionizing lives, economies and societies in exciting ways, through a wide range of new services and innovative applications. However, those novel applications are directly related with demanding system requirements, in terms of carrier frequency, bandwidth, dynamic range, size, power consumption, tunability, and immunity to electromagnetic interference and can be fulfilled by leveraging the advances in the microwave photonics (MWP) technology.

HAMLET's ambition is to develop and make available the MWP solution that fills the gap and the pursued need for a dedicated photonic integration platform, tailored to the needs of the 5G networks and capable of providing the required on-chip functionality.

HAMLET project aimed to disrupt the field of 5G networking, by developing a hybrid low-loss and a low-power consuming photonic integration platform, which enables the integration of a large number of photonic structures, providing in that way on-chip analog signal processing functionalities. Towards this end, HAMLET brought together the excellence and expertise of five European partners with leading position in the design, fabrication and packaging of polymer and silicon Photonic Integrated Circuits (PIC):

(i) the Institute of Communications and Computer Systems of the National Technical University of Athens (ICCS/NTUA) (Greece) that coordinated the whole endeavor and contributed to the design, simulation and characterization/testing of HAMLET modules;

(v) Cordon Electronics Italia (Italy) that took up the crucial part of hybrid integration of TriPleX and PolyBoard, as well as the assembly and packaging of HAMLET modules.

Within a period of 42 months, HAMLET developed a unified photonic platform, relying on the combination of the silicon-nitride platform (TriPleX) from LioniX International and the polymer platform (PolyBoard) from Fraunhofer Heinrich-Hertz Institute, which are both passive, flexible and very low-loss. Both platforms have been significantly upgraded and optimized to develop optical transceivers to seamlessly interface the optical fronthaul and the radio access at the remote antenna units of 5G base stations, equipped with multi-beam optical beamforming networks capable of controlling the shape and the direction of the transmitted microwave beams. On the PolyBoard side, graphene films have been heterogeneously integrated and modulation capabilities based on graphene have been shown for the very first time on a polymer platform. On the TriPleX side, LioniX Int. and SolMateS have heterogeneously integrated also for the first-time piezoelectric films, forming ultra-low power stress optic modulators which are used as the basic building blocks of the optical beamforming network. Cordon combined the two upgraded integration platforms by developing and employing a reliable 2D integration methodology and packaged four HAMLET prototypes in the form of evaluation boards.

HAMLET prototypes involve an 8×8 optical beamforming network based on Blass matrix architecture and can feed up to 8 antenna elements of a multi-element antenna and form up to 8 independent microwave beams. In this way, 8 parallel links to multiple groups of users can be supported while low cross-talk, and substantial increase in the total system capacity is achieved. ICCS/NTUA has developed the digital signal processing algorithm toolkit for the configuration of such optical networks taking into account the desired direction and shape of each transmitted microwave beam and for mitigation of the impairments raised in the analog optical part.

Moreover, Fraunhofer-HHI and LioniX Int. investigated for the very first time the 3D integration of the two platforms by means of spin coating of polymer material on top of silicon nitride wafer. Leveraging the 3D integration methodology, an additional HAMLET prototype has been fabricated incorporating a single graphene-based electro-absorption modulator at the PolyBoard and an 1 × 2 optical beamforming network at the TriPleX.

The capabilities and the potential of HAMLET optical beam forming technology was demonstrated live, on 4th September 2019, to the representatives of two of the biggest telecom companies in Greece with considerable presence beyond the nation and European borders: COSMOTE (telecom operator) and INTRACOM TELECOM, (telecom equipment provider). The consortium was represented by the Project Leader Prof. Hercules Avramopoulos and the Chief Science Officer of LioniX Int., Chris Roeloffzen. Within the demonstration the concept of the optical beamforming has been presented, highlighting the HAMLET architecture and all the technological advancements achieved during the course of the project. The impact of the HAMLET approach into the 5G networks has been supported by a comparison between a scaled up version of the HAMLET prototypes and a state-of-the-art commercial electrical beamforming network, showing the potential of the optical solutions to provide similar functionality as RF counterpart, but with significantly reduction of the footprint and of the power consumption.

Thanks to the inherent broadband nature of the microwave photonics, the use of the optical-enabled beamforming networks, developed within HAMLET can be extended beyond the operating frequencies of the 5G networks, enabling the control of microwave beams even in the THz regime, unlocking new frequency bands and enabling the commercial uptake of new emerging applications within these bands.

HAMLET is an initiative of the Photonics Public Private Partnership